CLYDE KELLER PHOR Has a new store on the European DaWanda 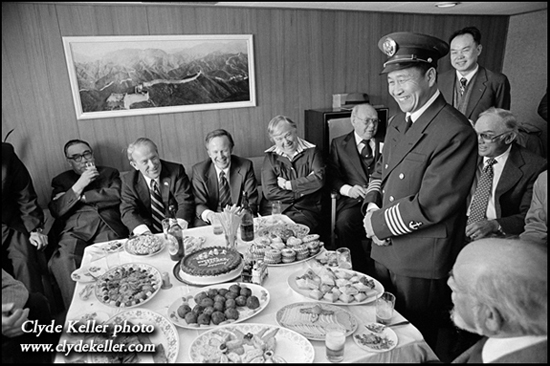 
To be included in a new video celebrating the Liu Lin Hai's historic visit to Seattle, Washington. My documentary photograph snapped inside the cargo vessel of the Liu Lin Hai, captures the normalization of trade relations between China and the United States. Used in their video presentation on September 23, 2016

Shown in my photo are Chinese and American Dignitaries in the Captain's Dining Room on board the cargo vessel, Liu Lin Hai.  The Lui Lin Hair docked at Port of Seattle's Pier 86. The event was historically important with many dignitaries attending, including Senator Brock Adams. The 637 foot Liu Lin Hai entered Washington’s Puget Sound on April 18, 1979 and tied up at Seattle’s Pier 86 grain terminal. It was the first time in nearly 30 years that a Chinese commercial vessel had entered a U.S. Port.

I could not have planned this celebratory photograph; the atmosphere was festive with many important dignitaries attending from the two countires including the Vice Premier of China, Deng Xiaoping, and the Secretary of Transportation to the United States, Brock Adams. The event was the result of efforts made by W. James Amoss Jr. of Lykes Bros. Steamship Co and Stan Barer, a lawyer to permit the calling of cargo ships between the two countries. The Liu Lin Hai, a COSCO cargo ship, calling upon the Seattle Port under the Chinese Flag, opened a new page of Sino-U.S. history. It was an historical turning point that marked the beginning of a new era of trade.  Also pictured is Washington State Governor, Dixie Lee Ray.Originally published in 1979 by the Port of Seattle and the U.S. Feed and Grain Council.  Recently used in 2010 for a promotion by the Washington State Department of Commerce for use in China."The Pacific, instead of being a barrier, should henceforth serve as a link."  Deng Xiaoping, then-Vice Premier of China
Posted by CLYDE KELLER at 2:47 PM No comments: 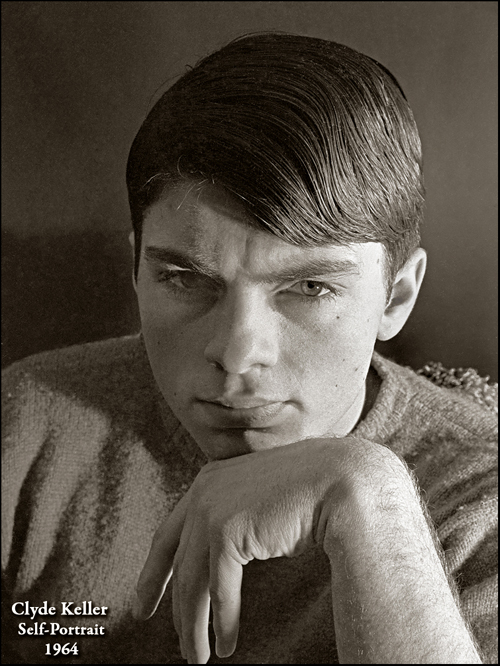 An early self-portrait I made in high school circa 1964. The camera was my original Nikon F with a 55m Micro Nikkor. The shot was made at home in the basement with Kodak Pan X, and high wattage tungsten bulbs in large aluminum reflectors. At the time I had discovered the work of the great portrait photographer, Yousef Karsh. This was my attempt at paying homage.
Posted by CLYDE KELLER at 11:51 AM No comments: 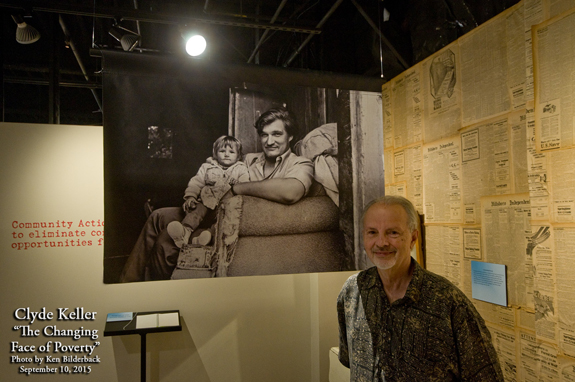 SCENES from my new Photo Show--

"Clyde Keller gave me his camera to chronicle the exhibit of his photos at the Washington County Museum chronicling pervasive rural poverty. I took the camera and pushed a little button thingy enough times to observe a moment or two in history."  Ken Bilderback
Posted by CLYDE KELLER at 7:57 PM No comments: 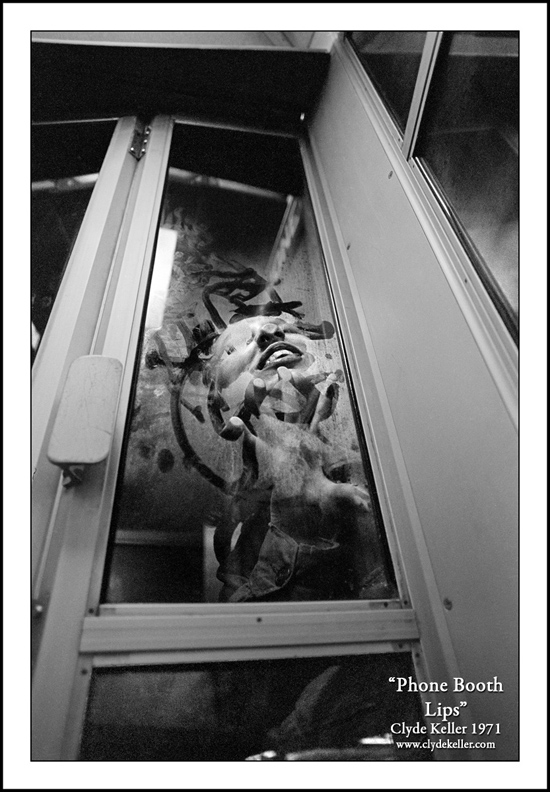 A strange, and unplanned impromptu happening is the substance of this madcap merriment caught in the Winter of 1971.  A work cohert, from Finland caught my eye as I attempted to use the phone booth on 23rd avenue and Irving street in Portland, Oregon.  She is seen by my crouching down inside the phone booth looking up and out at her as she scrawled her finger tips and pressed her lips on to the glass pane.  The result shows her mockery of American sex in this defiant (European) portrait. 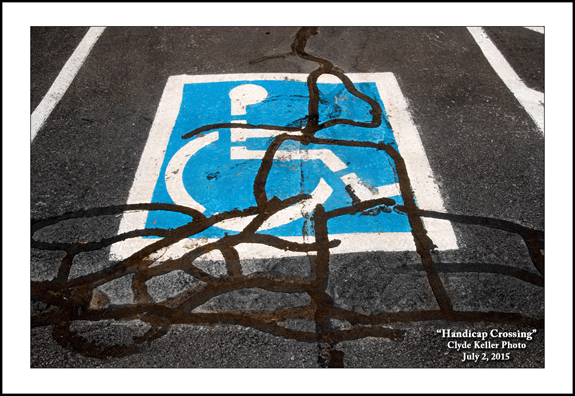 New Fine Art Image offered in several larger sizes.  My abstract image of a stenciled handicap symbol partially covered with sealant scrawling to cover cracks in the asphalt, as found in a parking lot in Sisters, Oregon, in the early afternoon, Thursday, July 2, 2015.

Posted by CLYDE KELLER at 4:12 PM No comments: 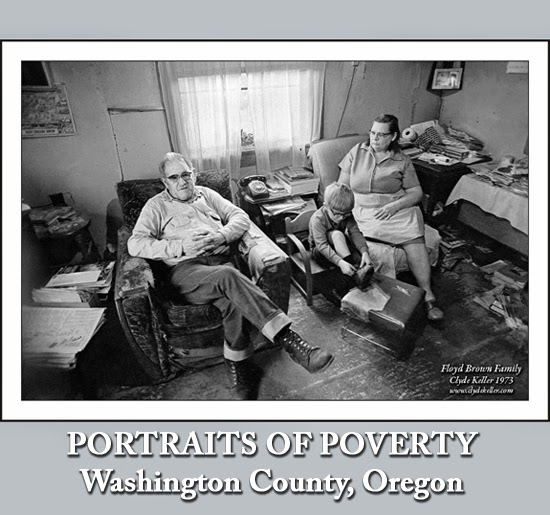 
In this vintage documentary image I was focusing on poverty as it could be found throughout Washington County, Oregon. The subject is of Floyd Brown and his family posed inside their house in a remote rural backwoods farming area. The entire family included the two adult figures and their grandson. This image was featured in my 16mm film entitled "Portraits of Poverty" which helped to bring into focus the effects of economics and environment as it had left its impression on the faces of the poor.

http://www.clydekeller.com/FLOYD-BROWN-FAMILY-Portrait-of-Poverty-Clyde-Keller-photo-1974_p_429.html
Posted by CLYDE KELLER at 6:00 PM No comments: 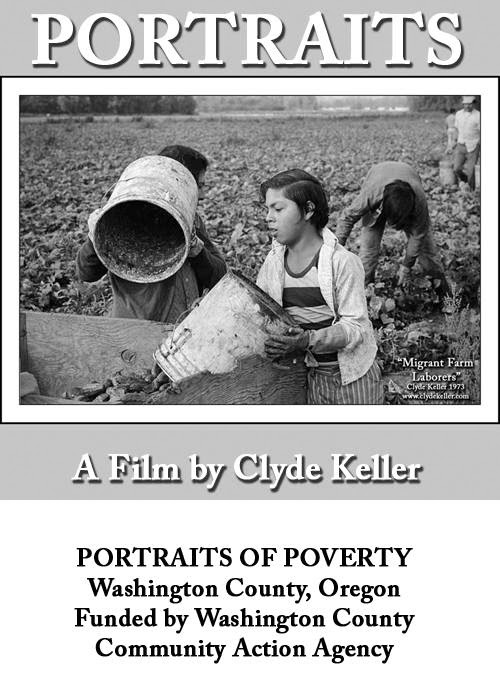 Cucumbers. Acres of cucumbers in the rich turd brown fields of Washington County, Oregon  picked by migrant farm laborers.  Chicanos mostly, who were recruited from Texas to live in smallish plywood shacks built by such landowners as Ron Tankersley, who owned some of the most notorious camps with the worst conditions. It was on his land that many of my photos were taken showing the actual conditions the workers and family members lived in. He would recruit them with false advertising showing them photos of pretty "modern-style houses"-- and when they'd arrive in Oregon they found plywood shacks-- a typical bait and switch tactic.  In an interview and portrait session, Ron Tankersley,  told me, the pickers love to "camp" here, it's like a "vacation" for them.  In reality, families, sometimes over a dozen children, all lived together in square, a 20x20 foot one room plywood shacks with inadequate water, heat, and "moldy" damaged mattresses.  Later, Ron served jail time, according to an article published on May 6, 1989 in the Eugene Register Guard for using illegal contractors.


I was there to take pictures of them-- and here in the Land of Opportunity they were all seemingly proud. But these scenes resembled another America to me, going back in time to the 1930s or before. Bathrooms, water and cooking facilities were outside the campground shacks.--  These photos may be be viewed at my website.

Posted by CLYDE KELLER at 11:49 AM No comments: